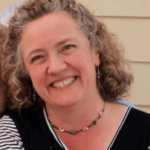 Beverly Harding Buehler (she/her/Euro American) – Executive Director – is a visual artist (mixed media collage, children’s book illustration, stained glass and installation work), arts educator and curriculum specialist. She began her teaching career in East Africa in 1981 and has focused on multicultural, anti-racist teaching in and through the arts from then on. Ms. Harding Buehler began work with Arts Impact in 2002 as an artist mentor. She has served as the Director of Arts Impact since 2013. 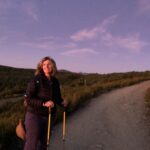 Meg Hannan has worked for Arts Impact since 2005 and has held several positions. As of July 2020, Meg is Executive Assistant and manages payroll, contracts, fee for service quotes, and accounting for all programming. Prior to this position, Meg was Program Manager for our Core and Voices from the Field teacher professional learning programs. As a volunteer (2008-2019), she coordinated the Regional High School Art Show at Puget Sound Educational Service District, Renton, WA. This annual art event showcases over 150 pieces of high school art work from the Puget Sound region. Meg holds a Bachelor’s Degree in Psychology and Education from the University of Washington as well as a K-8 teaching certificate. In her spare time, Meg enjoys backpacking. She completed the 93-mile hike around Mount Rainier (Wonderland Trail) and the 500-mile Camino Frances pilgrimage in Spain. She is half-way through the Washington sections of the Pacific Crest Trail. 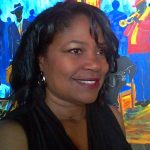 Grace A. Washington has been a professional artist for 25 years and has taught art to infants, children, and adults. She worked with at-risk youth in building confidence and self-esteem through art; taught life drawing at a Seattle’s Cancer Lifeline and collaborated with 397 Northeast Tacoma Elementary students on a special diversity art project she wrote and taught titled “Together We Rise”. Tacoma Art Museum featured the project before it was permanently installed in the school’s Michael T. Washington Library. The library was named after Grace’s son, a former student who was killed in Afghanistan in 2008 while serving as a Sgt. in Operation Enduring Freedom for the Marine Corp. Grace has a degree in Child and Family Development, a certificate in computer graphics, and is a graduate of TATLab (Washington State Teaching Artist Training Lab). As a teacher, Grace worked with Tacoma Public Schools as a LAP (Learning Assistant Program) Reading Tutor for elementary students and later as an Emergency Substitute Teacher for kindergarten through grade 8. Grace later worked as an Atelierista (studio teaching art teacher), Interim Co-Assistant Director and Interim School Director at a Reggio Emilia inspired preschool in North Seattle. Grace’s art has been exhibited in Washington, California, Oregon, and Pennsylvania. Grace has been with Arts Impact since 2015, first as a Teaching Artist Mentor and currently as the Program Manager for Voices from the Field and Core Programs. 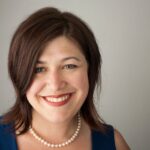 M. Louise McKay has more than 20 years of experience working with nonprofits in fundraising, marketing/communications, and organizational development, including TeamChild, The Greater Seattle Bureau of Fearless Ideas, Hedgebrook, ACT Theatre, and Literary Managers & Dramaturgs of the Americas. She is a former educator, consultant, and coach with a practical and academic background in the performing arts and nonprofit management. She is currently learning how to keep houseplants alive (don’t worry– spouse, kids, and cats are all doing fine). 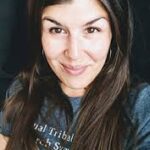 Erika Warren is a citizen of the Quinault Nation and resides in Olympia with her partner and 12-year-old twin boys. She holds a degree from The Evergreen State College in Indigenous Health and Education, with an emphasis on wild foods and plant medicine. Her academic and professional work centers culturally responsive youth and community programming, intertribal collaboration, and creating community-led place-based education models, moving away from the ‘banking model’ of education to help support, cultivate, and empower creative thinkers and problem solvers.

Erika is committed to supporting marginalized communities through all of her work. She serves on the Board of Directors for Garden Raised Bounty (GRuB) in Olympia, a local nonprofit that works to address hunger and provides food education and access to youth, veterans, and low-income families. Erika also works with Na’ah Illahee Fund, creating healthy pathways for Indigenous youth to food sovereignty, inquiry-driven project-based learning and self-determination.

Erika is deeply committed and passionate about her work with Arts Impact. As an Indigenous parent who experienced inequities in the public school system and now guides her own children through their learning, Erika is eager to help develop authentic culturally-grounded learning experiences for Native youth and their families. 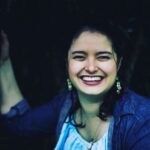 Program Coordinator—Voices from the Field

Ana María Campoy is a Mexican-American theatre artist, educator, and advocate. She moved to Seattle in fall 2010 to participate in Seattle Repertory Theatre’s Professional Arts Training Program and was part of TAT Lab’s inaugural class in 2011-2012. She served local organizations such as as the Education Programs Assistant at the Pacific Northwest Ballet, Director of Education & Community Engagement at Seattle Public Theatre, and Operations Manager at the Northwest Arts Streaming Hub. As an actor, director, or dramaturg, she has worked for Seattle Children’s Theatre, Book-It Repertory Theatre, Washington Ensemble Theatre, and Pork Filled Productions. One of her most cherished roles includes Catherine in a bilingual adaptation of David Auburn’s Proof, which she also produced and translated alongside director Arlene Martínez-Vásquez, and is now under consideration for publication. She’s developed four bilingual scripts for Seattle Shakespeare’s Touring Productions: The Taming of the Shrew, Twelfth Night, Macbeth, and Hamlet, the latter two she also directed. She is a passionate and proud advocate of the performing arts, believing that performance provides communities a voice and individuals self-exploration. As a teaching artist, her work has taken her throughout the state of Washington and other parts of the country. At the center of her work lives the driving desire to create opportunities for artists of color, to remove economic and geographical barriers for audiences and students, and to expand and deepen our American identity. Ana María has been with Arts Impact since 2015. 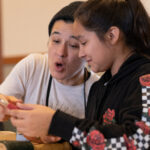 Shameka Gagnier presently resides with their partner and family in the unceded traditional territories of The Nisqually, Puyallup and Squaxin Island Peoples. They carry bloodlines from Central (Pure’pecha) and Northern (Cherokee Nation) Turtle Island, Africa (Northern and Western), and Europe (Ireland, England, Spain). They are committed to working within those intersections to create and support spaces that center art, food, and nourishment for black and indigenous communities. Currently they are a first generation student working towards their undergraduate degree at The Evergreen State College, where they are focusing on Indigenous Studies, Multicultural Communications, and Art.

Gagnier is a multi media artist, working as a wood carver, metalsmith, printmaker, performance artist, music maker, and gardener. Within the last year Gagnier has had the opportunity to work as a project coordinator in community lead projects. Much of Gagnier’s work as an artist is done in collaboration, as is their teaching pedagogy. Gagnier works as a coordinator and an artist mentor for Native Voices. This learning exchange is one of the most generous and transformative.